This article is Day #24 in a series called 31 Days of Mango, and was written by guest author Chris Koenig.  Chris can be reached on Twitter at @chriskoenig.

Performance is an important aspect of all applications, especially apps that run on resource constrained, network reliant mobile devices. As a user, it is relatively easy to tell when a running application is “slow”; what is not so easy is identifying the cause of the performance problems. Making changes to the source code without understanding the effect on performance can lead to unnecessary refactoring and potentially make the problems worse. 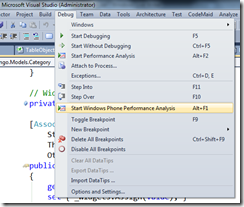 Be sure that you are launching the Windows Phone profiler, and not the .NET profiler, which is also found on the Debug menu, listed as “Start performance analysis (ALT-F2)”.

The first thing you’ll see is a page asking you to select the type of analysis you want to do. Unless you know specifically that there is a memory consumption problem, you should always start with the Execution analysis:

Once your testing session is complete, switch back over to Visual Studio and click the “Stop Profiling” link: 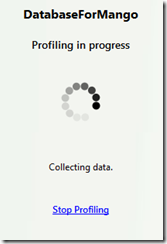 At this point, Visual Studio will save all the performance profile data into a .SAP file and add that file to your project. This file will be keyed to your project, as well as the execution date and time of the test (e.g. DatabaseForMango_2011_11_14_17_59_27.sap”. This recording can be reviewed now, or saved for later viewing. The main view of the results is the set of graphs that are provided. These graphs represent a number of different measurements that are all stacked on top of each other to provide a timeline-based view of your applications performance.

Starting at the top, these graphs show

To see the details of the data that is feeding the graph you simply use the mouse to select a region of the graph containing those frames that you want to drill down into. The lower section, referred to as the Detailed Performance Analysis section, will populate with Warning and Informational messages that highlight areas of concern for the selected frames: 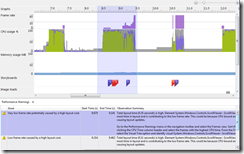 From this picture, you can see that two specific warnings are called out related to frame rate problems. For example – the first warning in the picture above contains the following information:

Warning: Very low frame rate potentially caused by a high layout cost.
Total layout time (0.35 seconds) is high. Element System.Windows.Controls.ScrollViewer : ScrollViewer took the most time in layout and is contributing to the low frame rate. This could be because CPU-bound animations are causing layout updates. Go to the Performance Warnings menu in the navigation toolbar and select the Frames view. Sort the frames by clicking the CPU Time column header and select the frames with the highest CPU time. From the Frames view, select the Visual Tree option and identify visual System.Windows.Controls.ScrollViewer : ScrollViewer in the tree.

This warning calls out the low frame rate based on how the layout is constructed relative to the ScrollViewer. The suggested action indicates that we should drill into the Performance Warnings menu and select the Frames view. If you look closely at the Detailed Performance section, you’ll see that right next to the Performance Warnings item is a button that controls a pop-up menu containing several choices beneath it into which we can “drill down” for more information. If you choose the “Frames” option, you will see something like this:

This list of the actual frames selected shows that many of them have a CPU usage well over 50% – in this case there is even one with over 80%! Selecting that frame, and going back to the navigation menu next to the Frames item from before, shows that there are still more levels of detail we can get to for that particular frame. Select each one of the items to get further information about what’s going on with that particular frame. Looking at items such as the Functions option will allow you to see what methods are being called in your application, and will provide links back to your source code for those methods from the application that are being executed. You can also look at the Visual Tree, Element Types and Cache Updates. These error messages, combined with the direct guidance given on where to look for problems and the tool’s ability for you to drill down into the root cases gives you a great viewport into your application to discover potential trouble spots and fix them before submitting to the marketplace for certification.

Now that we’ve seen how the tool works, here are a couple of tips for using it that will help speed you on your way to a speedier application:

Here are some links to additional resources on Windows Phone Performance Analysis:

Tomorrow, Gary Johnson will be writing about Background Agents, and how we can use this new feature of Windows Phone 7.5 to execute code even when our application isn’t running.  See you then!