Skip to content
jeffblankenburg What I Learned April 1, 2013 3 Minutes

Yesterday ended my first month of being an active Windows 8 app publisher.  The way I define “active” is that I have been consistently working to improve it since its launch.  There are many apps that are thrown into any marketplace, never to see an update of any kind.  In the first month, I shipped EIGHT updates.

Mind you, the first couple of updates were meant to solve two specific problems:

1)  Address a couple of small bugs I had identified.

2)  Get the Microsoft Advertising Control to actually work in my app.

Every app is going to have a bug or two, and there’s nothing terribly interesting about those, but the ads WERE tricky.  I created my ad units at PubCenter (which as it turns out, is not a place to find a frosty pint.)  I added an AdControl to the pages of my app using the identifiers from my ad units.  But they didn’t show up in my app when I published it.  In fact, after I published the first time, they didn’t show up in my development environment anymore either.

Being Lazy Was a Problem

One of the consistent pieces of feedback I had given developers was to uncheck the “Internet” option in the app capabilities if you weren’t using it.  Having that box checked also requires you to publish and include a privacy policy, and being lazy and averse to legalese, I decided my poker app, which didn’t have any need to connect to the internet, would not get this box checked.  (Of course, you do this right before you publish, not realizing you’re breaking everything.)

I opened a support ticket with PubCenter, and after a couple of days of trading emails and eliminating the obvious problems, they simply asked to see my code, if possible.  I pointed them to my github repository, where they identified that I had turned off “Internet” capabilities, and the AdControl needs this to serve ads.

Looking back, this is one of the most obvious statements I have ever written.

At the time, however, I seemed to me that the AdControl would probably have its own mechanisms for serving ads, and that they weren’t dependent on my app’s settings.  WRONG.

Anyways, once I flipped that switch on March 8th, the ads started showing up, and much to my surprise, I started making a little money.

In the first few days after the ads started working, I averaged about $1.30 a day.  Not retirement money by any means, but my expectations were in the pennies a day range.  A dollar or more seemed HUGE.  Here’s a chart of my first month: 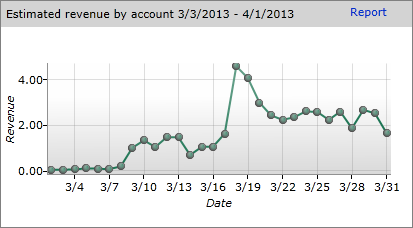 As you can see, March 18th was a huge day, grabbing me $4.55 that day.  I thought this thing was just going to take off.  As it turns out, that was my first day in the “New & Rising” category, and the shine slowly faded on that $4+ day.  Regardless, I’ve been consistently averaging more than $2 a day, which would be over $700 annually.  Not a fortune, but now I’ve got a baseline to start from, and I’ve got big plans to elevate that number over time.

The important number in the mobile app game is something called eCPM.  If you haven’t seen this term before, everyone uses is, but nobody really seems to define it.  eCPM means “effective cost per thousand impressions.”

In simpler terms, this breaks down to the amount of money you made for every 1,000 times an ad was shown.  For the month of March 2013, my eCPM fluctuated as I was adding users, and ended up at an average of $0.73.  This number seemed a little low, until I looked at where I’m hovering each day lately:

My plans for the future are pretty simple: drive more impressions per day.  One idea I have for this is to offer a prize to users who hit a royal flush in the game.  This should incentivize people to play more, in the hopes they’ll win the prize.  I need to determine whether or not this is really legal, as well as whether or not it’s permitted in the Windows Store.

Another one is to make it more simple, and just reward those players that play more than a specific number of video poker hands each month.  Something like 10,000 hands.

In either case, I’m looking for ways to get more players to play more often, to drive up the number of impressions I’m getting each day, which should also drive up the amount of money I’m making each day.

I’ll keep you posted on how this all works out.