In April 2011, I wrote a post about how my family and I were going to cut the cord from cable.  Since that time, much has changed in the landscape of cord-cutting, so I thought I’d write a quick summary of where we are today, both in service subscriptions and hardware.

Initially, we were subscribed to Hulu Plus and Netflix.  Netflix wasn’t even on my radar for the first article, because it was mostly older movies and television shows.  In 2011, it might have even been mailing us DVDs!  Today, we have a few more subscription services, but we also have access to much more programming.  Here’s the list (with prices, including tax):

With a 14 and a 10 year old, we have the “4 screens + UltraHD” package.  There have been plenty of times where we are all watching something separately.  Netflix has really upped their game with original content in the past few years, and is absolutely a staple of our entertainment watching.

This is still the primary way we watch television.  We add the shows we watch to our queue, and Hulu gives us a managed list of recent episodes when we open the app.  It’s easy to see and review what you’ve still got available to watch.  We stepped up to their “No Commercials” plan, which is about $4 more per month, but is totally worth the time savings alone.  22-minute shows are 22 minutes, not 30.

When this was announced, we jumped in to give it a try.  (Primarily because they gave us a brand-new Apple TV if we bought three months up front.)  We chose their “Go Big” option, which includes 105+ channels, but we get it as a grandfathered discount price of $40/month.  Here’s a picture of the included channels. 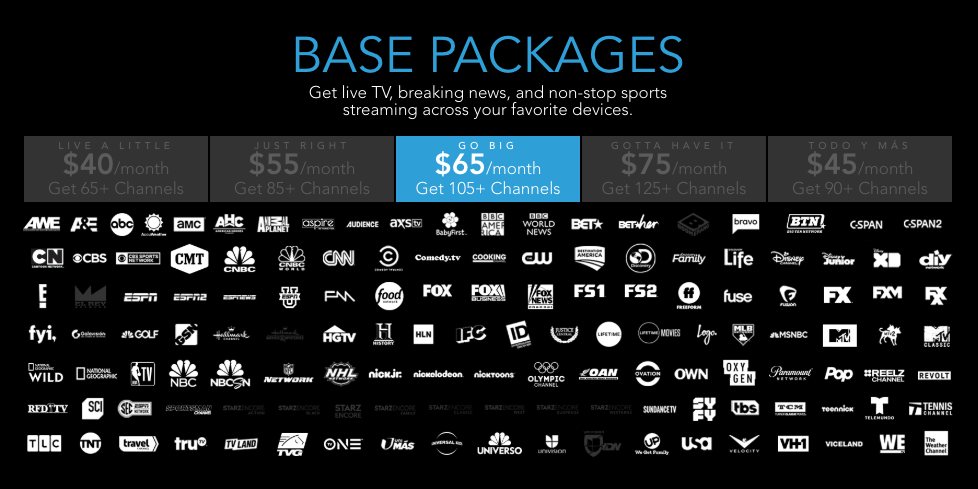 We obviously don’t watch all of those channels (this is the primary problem with bundling this stuff in the first place), but we felt like we’re getting a good deal, so we haven’t stepped down yet.  I actually JUST reviewed the list of channels we would lose by moving down a step, and I think I’m going to make the switch to “Just Right” today.  This would drop my monthly bill another $15.

One of the biggest features of having a DirecTV NOW subscription is that your credentials unlock all of the other channel apps.  For example, if you use the ESPN app, you can log in and watch literally any college football game on Saturday.  If you like the Food Network, you can open their app and watch shows from your favorite series.  I like the shows “Better Call Saul” and “Walking Dead,” which I can catch on the AMC app.

Because we are AT&T customers with their Unlimited Plan, and also DirecTV NOW subscribers, they throw in HBO for free.  We don’t watch it a ton, but for free, I’ll watch John Oliver and Game of Thrones!

We are really torn on this, and it’s really frustrating.  Primarily, we use a Roku Premiere+, which is outstanding, and has been our mainstay for years.  But the tide is turning, and there are a number of great devices out there.  We also have an Apple TV, and a Amazon Fire TV Cube.  There’s plusses and minuses to each.

Interface: Of all of the interfaces, this one wins.  The interface is just a grid of your installed apps.  Everything else you have to dig a little deeper to find.  It’s perfect.

Remote: The remote is also excellent.  Tactile, rubber buttons and volume control are huge.  It also has a headphone jack on the remote for when you want to watch without interrupting others.

Interface: Sadly, this is probably my least favorite interface.  There’s too much retail focus, and not enough easy visibility into the apps, which is my core use case.  While I completely understand, since Amazon Video has a ton of amazing content, this creates an extra step every time that I want to watch TV.  The one big feature this device holds is that it’s also a full Alexa device, that can also control your TV.  “Switch to Input 3,” or “Turn off the TV” are amazing commands that get used regularly in our house.

Remote: The remote is great.  Very well thought out.  Voice search is awesome.  Voice commands are great.  It’s really the software interface that holds everything back, because hitting the “Home” button still leaves you one step from most of the things that you want to use.

Interface: This comes close to the Roku interface: a giant scrolling list of apps. Where it starts to fall down is that it’s easy to get lost, especially with all of the default Apple apps that clutter up the list.  It’s the remote that makes everything fall apart.

Remote: This might be the worst remote control that has ever been created.  Because it mostly a trackpad, every time you pick it up, you can’t help but press a button.  All directional controls are done as swipes, which sounds awesome, but is actually much slower than pressing a physical button.  Add to all of that the fact that it’s wafer thin, and easier to lose in the couch than you’d like, and you’ll learn to hate it.  Not a fan.