This article is Day #12 in a series called 31 Days of Mango, and was written by guest author Jared Bienz.  Jared can be reached on Twitter at @jbienz.

As developers we’re quite proud of the apps we create, so it’s natural that we want to share our work with others. Sometimes we might want to share an app in the early stages, to get feedback and suggestions from our friends family and peers.

When we first released Windows Phone, the only way you could share an app before publishing was to share your applications XAP file. But sharing XAPs is problematic for a number of reasons. First, XAP files are just zip files, which means then can be extracted and examined. Second, developers didn’t have the ability to end a trial or push users to upgrade to the final product when it was ready. But probably the biggest shortcoming of using XAPs for beta testing is that they require the emulator or an unlocked developer device to run. That restriction alone eliminated most friends and families from participating in closed betas. But now, with recent updates to the Windows Phone marketplace, all of these problems have been solved. This article will focus on the new beta distribution feature and how it can be used to gather feedback from a much larger audience than you’ve had access to before.

There won’t be any code in this article since betas are handled entirely by the marketplace. We’ll walk through the steps for submitting a beta app, but before we get started there are a few handy tips you should know.

Submitting an application for beta is simple and we start with the same steps for submitting a regular app. First, we need to navigate to AppHub (create.msdn.com) and log in. From there, we click on the large “Submit for Windows Phone” button to start the process.

When filling in application details, don’t forget to include the word ‘Beta’ or add something else to the title so that the “regular” title won’t be reserved. Also be sure to change the distribution from “Public Marketplace” to “Private Beta Test”. 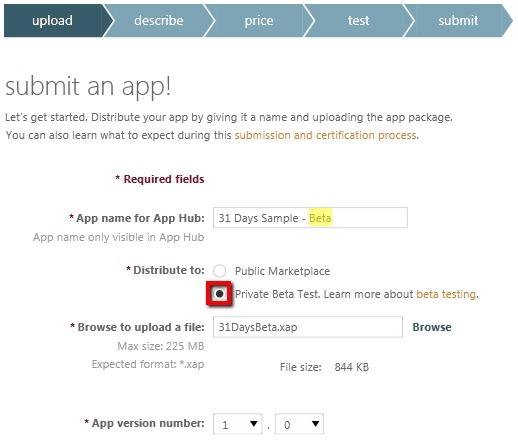 The description and artwork requirements are just like a regular app. You’ll need to be prepared with the same types of images and sizes, but beta artwork can include placeholders. You will need at least:

After the description and artwork have been submitted the wizard will skip the pricing tab and take you right to the new ‘test’ tab. This tab is where you provide a list of Live IDs (e-mail addresses) for each beta tester, separated by semicolons (the ; symbol). Try not to include any leading or trailing spaces.

Finally, when you’ve completed all of the steps above and after your beta has been accepted, each tester will receive an e-mail that looks like this:

The [link to your application] can be followed by the user on their phone and it will take them directly to a private beta page in marketplace. From there, users can install, rate and review the beta just like they would a normal app. And you, the developer, can review this information just like you would a normal app.

So, now that you know the process, what are you waiting for? Beta distribution allows you to collect feedback early and often, whether your piloting a new idea or giving users an early taste of your latest and greatest release. Why not give beta testing a try today?

If you’re new to Windows Phone and don’t have the tools yet, grab them here. And if you’re building several apps but don’t have a device to test with or are worried about marketplace fees, let me know. I might be able to help.

Tomorrow, guest author Dave Bost is going to cover another topic that is incredibly important to getting your app in the Windows Phone Marketplace, and that’s the Marketplace Test Kit.  See you then!